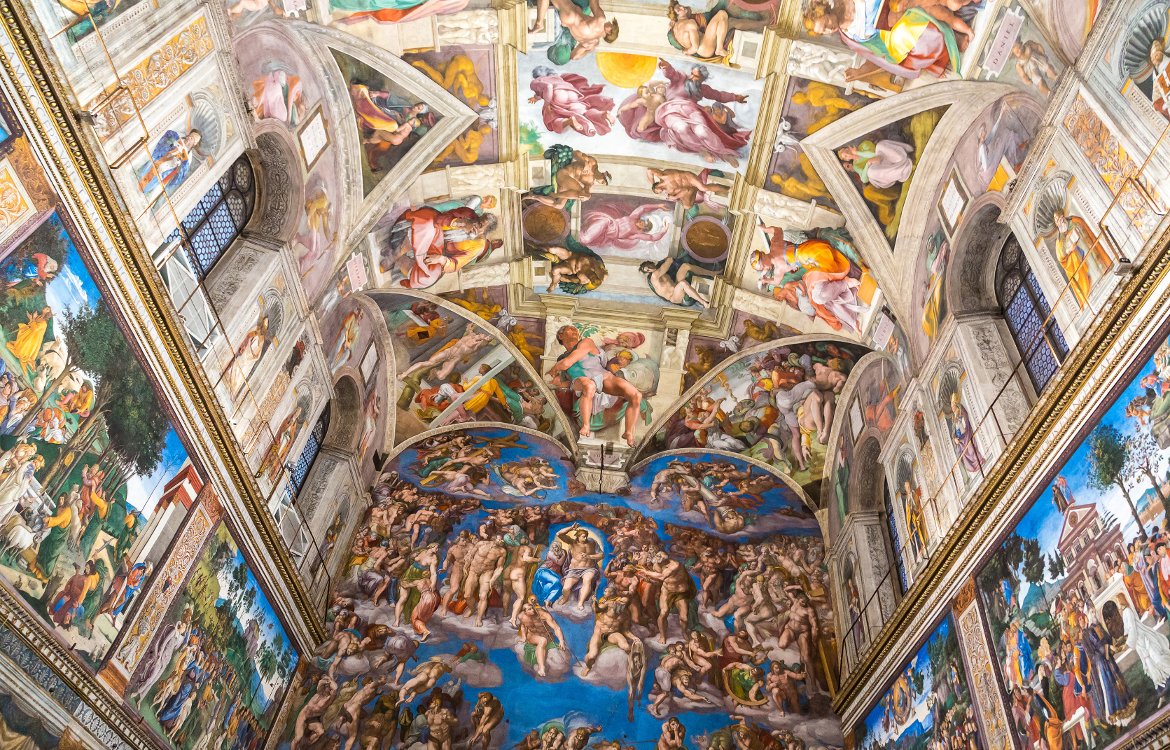 The Verona Arena - Opera Festival information and some practical advice

The Arena di Verona, host each summer to the Verona Opera season, is probably the world's most remarkable opera house. The Royal Opera at Covent Garden, Sydney Opera House, and La Scala may stake their claims, but Verona combines a quite unique setting with productions and performances of a consistently high standard.

The magic that is the Verona Opera is created from a heady recipe: a peculiarly Italian love and flair for the dramatic performance; an extraordinarily knowledgeable and demanding audience throughout the 'house', which asks for (and receives) sometimes electrifying performances from the world's greatest performers and musicians. It also helps to have a sonically perfect 2000-year-old Roman amphitheatre in which to stage productions ... evoking an atmosphere like nowhere else.

History of the Arena di Verona

Think a rather less battered version of the Colosseum in Rome and you have a picture of the Arena di Verona. Built in 30AD just outside the then city walls of the city, the Arena was conceived as a stadium for the games, the 'ludii', the circuses with which the Roman government kept the people happy. The Arena has survived remarkably intact. The original white and pink limestone cladding disappeared sometime after the earthquake of 1117. It largely destroyed the outer ring of the Arena di Verona, leaving only the 'Ala', and the stones of the stadium were scavenged for new buildings. But the Renaissance was probably the salvation of the Arena di Verona. With the revival of interest in Classical antiquity, the stadium was pressed back into use as a theatre.

But the modern renaissance of the Arena di Verona, and the birth of the Verona Opera, really starts in 1913, when musical entertainments were once again staged at the Roman amphitheatre. Remarkably, despite its lack of a roof and the absence of the old outer wall, the Arena delivers near perfect acoustics to (almost) every seat in the house. Architects and sound engineers labour long and hard over the placement of every seat, pillar and tile in modern opera houses in an attempt to get the sound right. Outdoor opera, meanwhile, normally requires the mic-ing up of the performers so that every word and note of Traviata, Tosca or Trovatore penetrates to the Gods. What did the Romans give us? Good acoustics it would seem.

The atmosphere on a hot summer Verona night, watching Aida, Carmen or Tosca, is like nowhere else (just pray it doesn't rain). And the quite unique nature of the event makes it a magnet for the major names in opera (and from the other performing arts). Recent guest directors have included legendary Italian film director Franco Zefferelli, with his production of Verdi's Il Trovatore. Back in the days of Ancient Rome, 30,000 would squeeze into the Arena di Verona, coming from all over Europe. Today, visitors come from all over the world to see the Verona Opera summer season, which includes standards from the repertoire, including Aida, Tosca, Carmen, Madame Butterfly, Cavelleria Rusticana and its traditional counterpart, I Pagliacci. The Arena sits 20,000, from the 'Poltronissime' (the best seats, on the floor of the arena), to the unreserved places on the upper stone galleries. Vertiginously high, you are propped here on the upper ramparts of the original stadium. 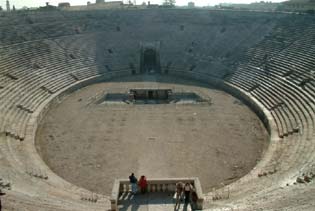 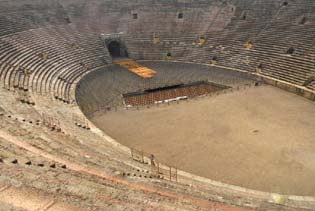 While giving any opera 'house' in the world a run for its money, and being achingly fashionable, the Verona Opera, with its volume and the relative cheapness of ticket prices is still very accessible. Crucially, ordinary opera fans and local people can get in, and a knowledgeable and demanding audience they are. At the same time, the casual opera-goer will not find too much in the programme to frighten them. Everyone will know at least something about Aida or Carmen, possibly even a few of the tunes, and this is a great introduction to opera-going (though it may spoil you for opera anywhere else).

Tickitaly is selling tickets for the numbered seats at the Arena di Verona, not for the unreserved spaces in the stone upper tiers. We offer a variety of seats (although availability may vary) at various prices. We have some images and a seating plan on this page.

The Arena di Verona is, of course, an open-air venue. While this is delightful on a hot summer night you are at the mercy of the elements. By all means dress appropriately for the occasion (and it is an occasion) but as well as your evening dress (optional) remember to take warm coats to put on, and something waterproof. And think practically here. It can be a long night (and a long walk back to the car or bus) in stilettos, so wear comfortable shoes. On the subject of the weather, should the rain start to fall before the end of the First Act you will get a refund. There will be no singing in the rain.

You can drive to the Opera at Arena di Verona, and there is fairly reasonably priced parking in the Arena carpark, but you will be competing with lots of other drivers, probably on roads and routes unfamiliar to you. Better to arrange a taxi (or simply take public transport). We have more on transport and getting to the Arena on this page. And spend a little time researching the opera you're going to see. No hardship that, simply buy a CD of Aida, Tosca or whatever, and follow this link for a synopsis of each piece.