How to book tickets for the Peggy Guggenheim Museum in Venice.

Located on Venice's Grand Canal, the museum is often cited as one of the most significant - and eclectic - collections of modern art in the world.

The collection of early 20th century European and American works is housed in a pleasantly intimate setting and has become one of the most visited attractions in Venice. It is ordinarily open all year round (closed just the 25th and 26th of December, plus each Tuesday) and is located in an interesting artistic area of Venice, looking out directly onto the Grand Canal.

The top collection of American and European 20th century art in Italy, this museum was created by the American heiress Peggy Guggenheim (1898-1979.)
Most of the important pieces were collected in London, New York and Paris in the late thirties and early forties, with the advice of artists and critics.
The Peggy Guggenheim Collection is housed in her former home on the Grand Canal, the Palazzo Venier dei Lioni. Since 1980 it has been open to the public with many temporary exhibitions as well as masterpieces from the Hannelore and Rudolph Schulhof Collection, the Gianni Mattioli Collection and the Nasher Sculpture Garden.

We have a page with some visitor information and collection history.

5 stars
CZ, United States
17th Oct 2018
Wonderful collection and a very knowledgeable and helpful staff.
5 stars
SO, Australia
30th Jul 2018
We enjoyed our visit to Guggenheim Collection immensely
5 stars
CM, United States
27th May 2018
It was one of my favorite highlights of my trip (of 14 days)
5 stars
JD, United States
10th Mar 2018
Beautiful place. Tickets worked as promised. Skip the line.
5 stars
CC, Australia
15th Jun 2017
Amazing collection and a beautiful location. A once-in-a-lifetime experience.
5 stars
CS, Canada
6th Jun 2017
This is a unique museum, on the grand canal of Venice, displaying works by many well known artists of the mod-twentieth century.
Return to top of page. 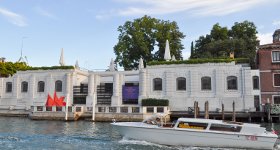