Official tickets to visit the Church of Santa Croce, the chapels and cloisters, plus the adjacent museum.
“This is a beautiful church which had no admission for years...I love this place and you can access the Leather School at the back with your admission to the church.”

FH, USA
“This is a MUST SEE!!! I wouldn't have known about it without this website. This was a highlight of the different sightseeing from our trip.”

Once upon a time a church as important, as grand, as treasure-filled and as visited as Santa Croce in Florence survived on the bequests and donations of wealthy and notable local families and merchants. No longer. The maintenance of sixteen frescoed chapels (works by Giotto and his pupils), the resting places of Michelangelo, Galileo, Rossini and Machiavelli - this has forced on the authorities a requirement to charge entrance fees. You may read more about the church of Santa Croce on our information page, with images and a layout plan.

The church is located in Piazza Santa Croce, a short walk from Piazza dell Signoria, home to the Palazzo Vecchio. Construction work began in the late 13th century but both the neo-gothic facade and the clock-tower were added much later, in the 19th century. Interestingly, given proximity to the Palazzo Vecchio, the church was originally outside the city walls, built on marshland, and this low-level situation meant that Santa Croce was badly damaged by the 1966 floods.

The buttons below will give greater detail on the tickets available throughout the year, and do use our calendar above to check availability!

You may view a location map showing Santa Croce as well as other Florence landmarks on our page here.

5 stars
SE, United States
30th Oct 2018
Love the church. Wonderful experience and will definitely recommend it to friends and family
5 stars
WG, United States
18th Jul 2018
Super!!
5 stars
VB, United Kingdom (Great Britain)
17th Mar 2018
So much to take in thorough enjoyed visit
5 stars
EA, United States
28th Jan 2016
Beautiful.
5 stars
FH, United States
6th Sep 2015
This is a beautiful church which had no admission for years...I love this place and you can access the Leather School at the back with your admission to the church.
5 stars
GT, United States
26th Aug 2015
San Croce was simply magnificent. If someone has a problem with San Croce, they need serious psychiatric intervention!!!!!
Return to top of page. 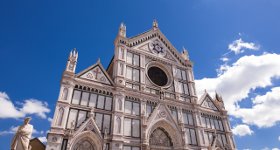