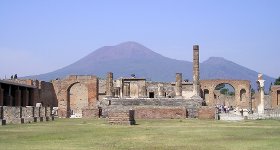 Sorrento to Pompeii and Herculaneum

A fascinating walking tour of ancient Pompeii and Herculaneum, both buried by Vesuvius in 79 AD. Only rediscovered in the 18th Century, both towns offer an interesting insight into the day to day life of the ancient Romans.
This tour does not include lunch or entrance fees for the excavations of Pompeii or Herculaneum, including the first 'free' Sunday of the month.

Departing at 8:10 AM from Sorrento and returning at 5:00 PM (Sundays only), you'll first explore the streets of Pompeii with its many fascinating forums, baths and villas. Then after some free time for lunch, you'll continue to Herculaneum. This popular Roman resort was buried in mud and lava (rather than the ash that covered Pompeii) and, with more wooden structures and smaller objects surviving, provides an interesting contrast to Pompeii. The tour returns to Sorrento at about 5 PM.

The tour is in English, but it is possible to arrange bilingual tours (English/French or English/German) for groups of up to 55 people.

Entrance fees: Please note that some of the following fees may not be included in your ticket (this will be stated in the ticket description):

In order to take advantage of reduced or complimentary tickets, you must present valid identification (ID card or passport) on the day.

« Full range of Pompeii excursions
Reviews
As this is a new offering we do not yet have any customer reviews. Watch this spot - we'll be posting reviews as soon as we receive them!
Return to top of page.